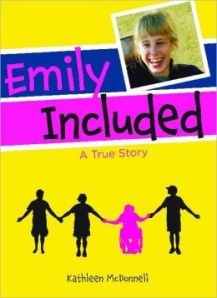 Synopsis:  Emily Eaton was born with a severe form of cerebral palsy (CP) and had many physical challenges.   As a young child, her body was “floppy,” but she eventually defied doctors predictions and learned to sit, feed herself and walk with a special walker and leg braces.  She uses a wheel chair.  Verbal communication was difficult, although she learned to communicate with facial expressions and body language. Emily also had visual difficulties.  Because of her special need for therapy and teachers, Emily had attended a school for children with disabilities.  But at age five, her parents decided to enroll her in a public school so that she could interact with other children and become part of the community in which she lived.  Emily was nervous at first, but grew to love her school and new friends.  She attended school two years before the board of education intervened.

Little did Emily know she was about to face a great challenge in her life  — a school system that only saw her disabilities and not her abilities.  She was denied access to her second grade class.    This very strong girl only wanted the right to attend school like a regular kid.  With the support of her family, Emily  confronted the local board of education first.  This courageous girl ended up taking her case to the Canadian Supreme Court in the late 1990s.  Her fight became a battle for all children with physical and mental disabilities to have the right to be included in public schools.

What I like about this book:  Kathleen McDonnell has written an inspirational narrative about Emily’s remarkable journey to attend school with non-disabled children.  What I found fascinating was that Emily’s teachers and students found how much they benefited from her participation in school.  They all worked together as a team and enjoyed her presence in the classroom.  Teachers reported here were so many valuable lessons for everyone involved.  Her inclusion in school was groundbreaking for a child with severe CP in the nineties.   According to the author, there is still a lot of work to be done because “resources and funding remain major roadblocks to facilitating these rights in classrooms today.”   Emily however, graduated from high school.  You may visit Kathleen McDonnell at her website.

This book has been provided to me free of charge by the publisher in exchange for an honest review of the work.