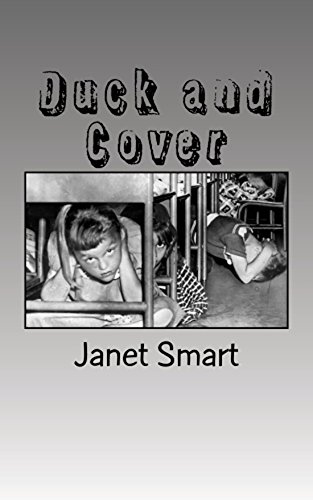 Opening: “I Survived the long drive from Cleveland. Now if I could just survive the Russians, I’d be OK.”

Synopsis: After his dad dies in an accident at work, twelve-year-old Teddy Haynes and his mom come back to live with family in rural West Virginia. They hope to start over, but some people say the Russians are going to blow up the United States.  How can they start over if the world comes to an end?

He finds his life filled with talk of bomb shelters, a cat and dog that don’t get along, clinging two-year-old twin nephews, and a pretty girl he’s too shy to talk to. To help cope with their fears, Teddy and his friends convert an old cave in the woods into a bomb shelter. Will they be able to work together and pull through the tense-filled months during the Cuban Missile Crisis in the fall of 1962?  And will Teddy be able to overcome his grief from the loss of his father?

Janet Smart has written a moving and sensitive novel that will teach generations of readers about the Cuban Missile crisis in 1962. She balances the tension with a good dose of humor to lighten the anxiety the kids feel. This nostalgic read will be a stroll down memory lane for many adults as they recall “duck and cover” school drills, during an uncertain time.

The narrative is written in first person. The story is character-driven. She gives the reader deep insight into Teddy’s loss, fears, his active imagination, and his coping skills. Teddy’s a determined protagonist with big dreams of becoming an astronaut one day. He tries to encourage his friends to have dreams, because most of them, like Bobby, know they will head into the coal mines like their ancestors.  His best friend, Melvin, has a limp from polio and wears a smile that stretches clear across his face. Melvin is good for Teddy because he’s optimistic, cheery, light-hearted, logical, has a flair for using big words and enjoys a good prank.  Skeeter likes to write and organize things. So she’s handy to have around as they plan their bomb shelter, even though Teddy is uncomfortable around a girl he’s sweet on.

The theme of the war weighs heavily upon their minds. But the plot focuses on brave friends who decide to take action. It is about their big adventure of building a shelter in a “haunted” cave. They scavenge through junk yards for chairs, mattresses and wood. They fill it with first aid supplies, flashlights, canned goods and water.  There is a lot of suspense for the foursome and some uncovered secrets.

Smart’s novel would make an excellent addition to any school library. It’s also a timely read with threats around the globe.

Janet F. Smart lives in picturesque West Virginia. She is the mother of three grown boys. She enjoys writing for children, bringing her thoughts, dreams and imagination to life. A flicker of a childhood memory was the inspiration for this novel. Visit her at her website.

Greg Pattridge is the permanent host for Marvelous Middle Grade Monday posts on his wonderful Always in the Middle website. Check out the link to see all of the wonderful reviews by KidLit bloggers and authors.

21 thoughts on “Duck and Cover by Janet Smart”