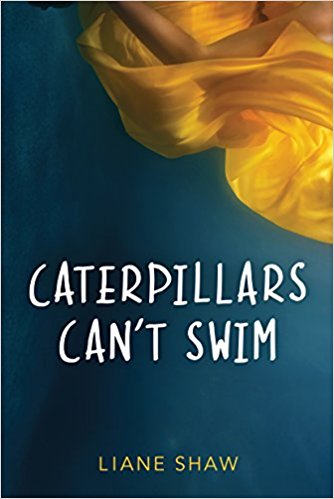 Publisher’s Synopsis: For sixteen-year-old Ryan, the water is where he finds his freedom. Ever since childhood, when he realized that he would never walk like other people, has loved the water where gravity is no longer his enemy. But he never imagined he would become his small town’s hero by saving a schoolmate from drowning.

Jack is also attracted to the water, but for him it’s the promise of permanent escape. Disappearing altogether seems better than living through one more day of high-school where he is dogged by rumors about his sexuality. He’s terrified that coming out will alienate him from everyone in town — and crush his adoring mother.

Ryan saves Jack’s life, but he also keeps his secret. Their bond leads to a grudging friendship, and an unexpected road-trip to Cosmic Con with Ryan’s best friend Cody, the captain of the swim team. They make an unlikely trio but each of them will have the chance to show where he is brave enough to go against the stereotypes the world wants to define him by.

Liane’ Shaw’s examines the paralyzing impact of bullying on teens in this raw, honest and emotional novel. What stands out for me is the prejudice against two teens — one who has a physical disability and the other teen who is struggling with his sexual identity.  This is the first time I’ve seen the differences appear together in a compelling story, especially when the teen who is disabled is the hero.

The characters drive the action in this story. The main character Ryan, was born with cerebral palsy and has spent his life in a wheelchair. However the story really doesn’t focus on his disability, but his funny, upbeat personality and his role on the school swim team. Jack is sad and depressed. He has no friends, and keeps to himself. Ryan befriends Jack, listens to his pain as he deals with his identity, and keeps his secrets. Kids suspect that Jack’s gay and bully him. Ryan’s friend, Cody, steps in when he sees the school bullies harassing both Ryan and Jack after school.  Cody is hyper, wacky, funny, obnoxious, and someone you can dislike one moment and love the next. He provides for a lot of comic relief in the story.

I really liked the metaphor of a caterpillar transforming into a butterfly, a mirror of what happens when three unlikely teens come together to support each other. Especially Cody, who is homophobic. His growth as a character meant the most to me.

The plot is multi-layered, brave and complicated. Jack’s drowning happens early in the story with a lot of drama and action. Readers may wonder where the story is headed. But the pacing is fast, engaging and lighthearted at times. There is  more to this deeply moving novel that readers will find appealing.  It is an inspiring story about family, friends and hope.