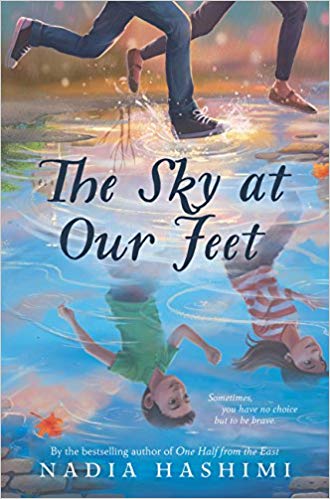 The Sky at Our Feet

Twelve-year-old Jason has just learned that his Afghan mother has been living illegally in the United States since his father was killed in Afghanistan. Although Jason was born in the US, it’s hard to feel American now when he’s terrified that his mother will be discovered—and that they will be separated.

When he sees his mother being escorted from her workplace by two officers, Jason feels completely alone. He boards a train with the hope of finding his aunt in New York City, but as soon as he arrives in Penn Station, the bustling city makes him wonder if he’s overestimated what he can do.

After an accident lands him in the hospital, Jason finds an unlikely ally in a fellow patient. Max, a whip-smart girl who wants nothing more than to explore the world on her own terms, joins Jason in planning a daring escape out of the hospital and into the skyscraper jungle—even though they both know that no matter how big New York City is, they won’t be able to run forever.

Nadia Hashimi has skillfully penned a moving and sensitive tale about two brave teens on the run in New York City (NYC) when difficult circumstances uproot their lives. Their amusing adventure through the Big Apple showcases the city’s character with its subways, NYC Marathon, Central Park Zoo, food trucks, and police officers on horses.

The characters are authentic and believable. Jason’s strong narrative highlights/underscores the dilemma for children of undocumented immigrant families. He witnesses his mother being arrested by police at work because she didn’t renew her visa and is an illegal immigrant. What will happen to him? He sneaks into their apartment, packs his backpack, and embarks on a journey to find his Auntie Seema in NYC.

Jason blacks out in the train station and wakes up in a hospital with a head injury. There he meets Max, a girl who is smart and artful in helping Jason dodge a police officer’s questioning. She’s trapped like an inmate in her hospital prison and longs to experience a big adventure before she undergoes a major surgery. Together they plot an epic hospital escape and navigate the streets evading police officers.

The author sets aside the political aspects involved in deportation of decent immigrant parents and their American children. Instead she focuses on the emotional and physical impact on a teen like Jason. His fear that his mother may be sent back to Afghanistan forever, is daunting. How is a Muslim boy in America supposed to cope with something so big? His mother hasn’t created a plan for Jason if she’s arrested. He’s left to his own resources to find Auntie Seema.

The plot is original and courageous with moments of humor, action, danger, and suspense that will keep readers quickly turning pages. When Max has a seizure along the way, Jason is challenged to find the way on his own. This is an engaging read about current and thought-provoking issues. It is also heartwarming and hopeful and a good choice for classroom discussions.

23 thoughts on “The Sky at Our Feet by Nadia Hashimi”