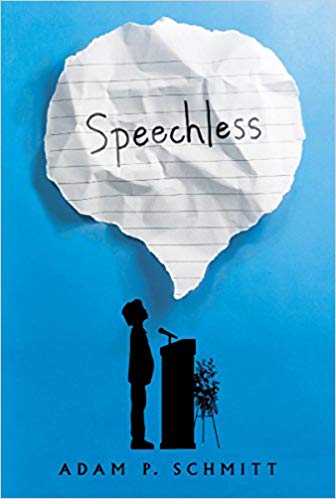 Suitable for Ages: 12 and up

How do you give a eulogy when you can’t think of one good thing to say? A poignant, funny, and candid look at grief, family secrets, difficult people, and learning to look behind the facade.

As if it weren’t uncomfortable enough being stuffed into last year’s dress pants at his cousin’s wake, thirteen-year-old Jimmy has just learned from his mother that he has to say a few words at the funeral the next day. Why him? What could he possibly say about his cousin, who ruined everything they did? He can’t recall one birthday party, family gathering, or school event with Patrick that didn’t result in injury or destruction.

As Jimmy attempts to navigate the odd social norms of the wake, he draws on humor, heartfelt concern, and a good deal of angst while racking his brain and his memory for a decent and meaningful memory to share. But it’s not until faced with a microphone that the realization finally hits him: it’s not the words that are spoken that matter the most, but those that are truly heard.

Adam Schmitt’s complex story deals with bullying, death, grief, suicide and dysfunctional family relationships. These heavy topics are all introduced through the lighthearted perspective of a 13-year-old Jimmy, who narrates the story. Jimmy is one of the best characters I’ve read in a while.  He has a strong voice. Even though he can’t remember one positive memory of his cousin, he delivers a eulogy at the end that readers won’t forget.

It is important to see mental illness addressed in stories. I remember knowing kids like Patrick when I was in school, so this story intrigued me from the start. I appreciate how carefully Schmitt develops his characters. He even makes me care about Patrick by the end of the story.

Patrick is off-the-charts disturbed. He has no friends except his cousin, Jimmy — and that is pushing the envelope. Jimmy can’t recall a single positive memory of his cousin. When he got a toy, Patrick broke it. If he got ice cream, Patrick would find a way to make him drop his cone.  At a Fourth of July party, Patrick injures Jimmy with firecrackers. Patrick’s family doesn’t know what to do about Patrick’s behavior, and their reactions are unpredictable.

Each chapter begins with a small truth that Jimmy learns about funerals: people who show up, people who enjoy the drama of attending a wake, family members who show their true colors, things you may hear that you don’t expect, everyone has a story, and listen more than you speak. Jimmy’s observations offer a lot of comic relief. And he constantly worries that the button on his tight-fitting pants, which is too loose, will finally pop at the wrong moment.

The author took some risks with this story, but the ending makes it worth the read. Even though I would  like to know why Patrick did what he did, it lends itself to some good discussions with middle grade readers. Speechless is an intriguing story.

Adam P. Schmitt has been a middle-school educator for more than fifteen years. Speechless is his debut middle-grade novel. “This story came to me in a single moment while at the funeral of a former student…The characters here don’t represent any one person, but several people in my life who had stories to tell and didn’t know how to find someone to listen.” Schmitt lives in Oswego, Illinois, with his wife and two sons. Visit Schmitt’s website.

*Review copy provided by the publisher.