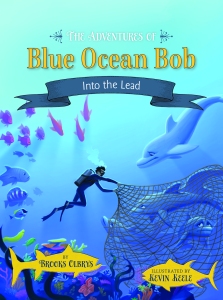 The Adventures of Blue Ocean Bob: Into the Lead

Opening: “On a beautiful isle in the Sea of Kerchoo, / there lived a small boy with a big job to do. / Blue Ocean Bob worked for Mary Marine. / He protected the sea life and kept the shore clean.”

Synopsis: One morning while Blue Ocean Bob is tying his boat to the dock, a jolt knocks him off his feet. An earthquake makes a deep crack in the ocean floor and creates an oil spill that endangers the marine life of Kerchoo. With the help of Marine Mary and Doc, the wise sea turtle, Bob faces a big challenge that requires him to temper his fear and dive with Mary to repair the damage. When they return he learns from Wallace Walrus that a great white shark has been beached because of the quake. With the help of his island friends they float the shark back into the sea.

Marine Mary puts Bob in charge while she travels to another island to aid with a problem.  Bob faces another challenge when some dolphins get caught in a net and he relies upon his sea friends to help with the rescue. The Island Council is pleased with Bob’s work, but Bob’s feels overwhelmed and realizes he needs some extra help. He finds an assistant in a Molly, who he meets at the shore. 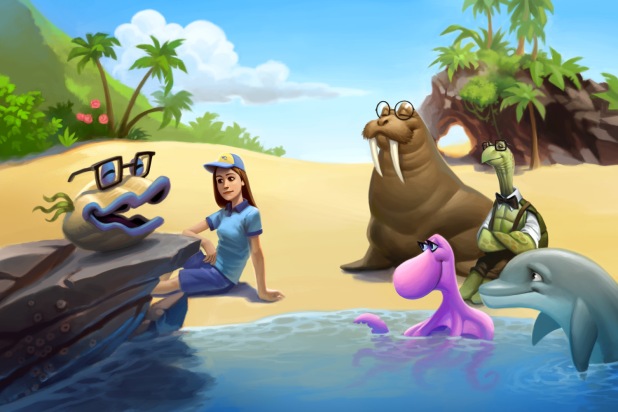 Resources: Parents and teachers can download a free Activity Guide on the Blue Ocean Bob website. You can also download iPhone and iPad apps. Endangered Species Day was celebrated May 20. Check out the National Marine Life Center where children can learn more about rehabilitation, adoption of rescued sea turtles and seals, and what they should do if they find stranded marine life.

Brooks Olbrys: Inspired by his son, Olbrys created this unique marine life series to share timeless achievement principles with children.  His over-arching theme is that “a positive attitude can help one overcome what at first may appear to be insurmountable obstacles.“

The Adventures of Blue Ocean Bob: A Challenging Job

Opening: On the Island of Roses, there once lived a lad / who was looking for more than the things that he had. / He discovered his passion to safeguard the sea / and finally knew what he wanted to be. / He adopted the nickname of Blue Ocean Bob / and decided to master this challenging job.

Book Jacket Synopsis: Blue Ocean Bob loves the sea and wants to dedicate his life to protecting it. He begins a new job as assistant to Mary Marine, the Island of Rose’s leading marine biologist, and with his hummingbird guardian, Xena, by his side, works hard to carry out his duties to the sea creatures both on and off the shore. When the challenges mount, Bob seeks advice from Doc the turtle, Earl the clam, and Wallace the walrus, who each help him to develop the positive attitude he needs to succeed.

Resources: Parents and teachers can download a free activity guide on The Adventures of Blue Ocean Bob website. You can preview the first chapter of the book for free and view a trailer for the first book in the series. This is a unique series because Olbrys has used “timeless principles of achievement,” to encourage children to dream big — Think it. See it. Believe it. Achieve it.

The Adventures of Blue Ocean Bob:  A Journey Begins

Opening:  “There once was a boy who lived close to the sea and daydreamed all day about what he might be.  His island was lush and his life wasn’t bad, but he wasn’t content with the things that he had.”

Synopsis:  Bob lives on a beautiful island, but something seems to be missing in his life.  He sets out on a journey with his chatty hummingbird, Xena, to seek guidance from the friendly creatures of the ocean.  He meets Al, a playful dolphin, Doc, a sage turtle, Earl, the clam, and Wallace the walrus.  They all offer Bob wise and sound advice.  Doc helps Bob realize his passion to protect the blue ocean and sea life.   His journey to fulfill his purpose is only beginning as he has to face his doubts and fears.  He meets Mary Marine, the Island of Roses’s leading marine biologist, who gives Bob a series of tests.   She asks Bob to tag a blue whale and document its progress for 30 days.  He encounters his first problem when his boat springs a leak.  He feels hopeless.  Xena, his guardian, is always nearby to warn Bob of danger.   But with the help of his new sea friends, Bob learns to overcome his fears, sets some goals and develop a positive attitude so he can become Mary’s trusted assistant and care for the sea creatures he cherishes.

What I like about this book:  Brooks Olbrys has created an entertaining and engaging early chapter book series for children. The book is beautifully illustrated by Kevin Kelle, whose breathtaking artwork of the ocean and sea life fills every page.  Blue Ocean Bob encourages children to pursue their dreams.  It will spark their imaginations and take them on a journey.  The plot is strong and full of adventure.  The characters are endearing and believable.  Olbrys has written a charming book in lyrical rhyme, which will engage young children who aren’t able to read alone.  Older readers will enjoy the important lessons about finding one’s passion and turning it into his/her purpose.  This is a unique series because Olbrys has used “timeless principles of achievement,” to encourage children to dream big — Think it.  See it.  Believe it.  Achieve it.   Visit Oblrys’s website to learn more about the The Adventures of Blue Ocean Bob , preview the first chapter of the book for free, learn about upcoming books in the series and click on the app.

Father-Son Partnership:   When Brooks Olbrys began writing Blue Ocean Bob, his son, Nicolas, was four years old.  He is now eight.  I want to share a brief interview about their inspiring relationship.

Nicolas has been a great partner on my project.   When I wrote the first five or six stories and was unsure about them, Nicolas was the first one to hear them.  He would give me honest and insightful comments about the characters, action or rhyme.  And we would brainstorm about new characters or storylines.  His most helpful advice was, “Dad, that is pretty good, but it needs to be funnier.”  The messages are important, but won’t get through if they aren’t fun and engaging for kids.  We try to incorporate that humor into the illustrations too.  Nicolas reviews every illustration and I always get his approval before giving the final sign off.  Another comment I love is when he told me “Dad, you are like a really, really good amateur writer.”

Nicolas also helped with the music that we needed for the trailer and app.  We listened to dozens of samples from the internet and our app developer.  I couldn’t decide.  I told Nicolas if he would help me, I would make him an equity partner in the app project.  That got his attention.  He listened to the four “finalists” and chose one from an internet site.  He said that it was “just too much better” and we went with it.  Later, he asked me “Dad, if I had chosen the other ones, would you have gone with those?  I told him yes, it was his decision.  The music is perfect for the trailer, app and series.  And it is great to have an in-house junior creative director.