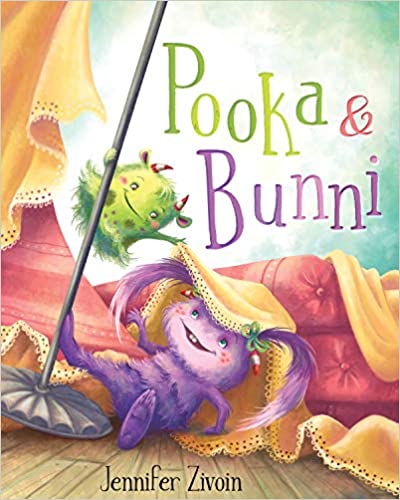 Bunni is building a wonderful pillow castle while her little sister, Pooka, peppers her with questions and wants to help. Bunni replies, “You’re too little to help! You’ll just knock everything down.” Bunni leaves for her whistling lessons and warns Pooka not to touch anything.

But you know little sisters. The moment Bunni is gone, Pooka peers inside the castle with awe. She bounces up and down until “uh oh…” the castle comes tumbling down on top of her.  But don’t under estimate little sisters, even if the pillows are much bigger than she is and way too heavy.  Pooka uses her imagination and creativity and perseverance to build something just as wonderful! What will Bunni think?

Jennifer Zivoin has written a delightful story about siblings playing together that is full of heart. Bunni is like many older siblings who don’t want their little sisters to get in the way of their big projects. Except there is a twist in this story that makes it such an endearing read for children and their parents.  Kids will cheer for Pooka and her her imagination and can-do attitude. And they will be delighted with Bunni’s response and the Ooops! moment at the end.

Zivoin’s illustrations are beautiful and showcase the wonder of children dreaming big and playing together.  Just look at that cover! This book is an excellent bonding story for parents to share with siblings.

Resources/Activities: This book is a great starting point to encourage your older and younger kids to build, draw, decorate, bake or plant something together, Younger siblings look up to their older siblings and want to do everything they do. What a fun family discussion book about teamwork and playing together.

Jennifer Zivoin has illustrated over 30 books, including Something Happened in Our Town and A World of Possibilities. This is the first book has has both written and illustrated. Jennifer earned her Bachelor of Arts degree from Indiana University, Bloomington.  Jennifer lives in Carmel, Indiana. Visit her at her website.

*Reviewed from a copy provided by the publisher in exchange for a review. 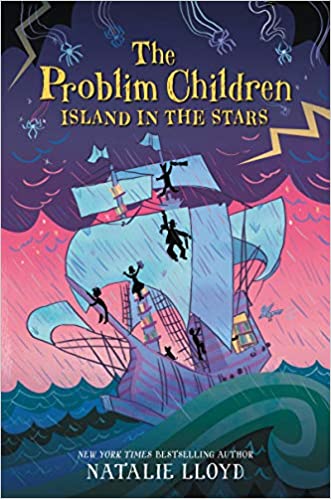 The Problim Children – Island in the Stars (Book 3)

When the Problims’ baby brother, Toot, is kidnapped by the evil Cheesebreath, Sal and his six siblings set sail on a pirate ship to get him back. But Cheesebreath won’t let Toot go until the Problim children lead him through the barrier islands to their grandpa’s treasure.

The problem is the treasure could be dangerous in villainous hands, and the Problims don’t know exactly where it is! Grandpa’s clues say it lies “where the stars fall into the sea,” but there are all sorts of dangers along the way — like angry neighbors, kid-eating plants, and Miserable Mist!

Now Sal and his sibling only have three days to figure out the puzzle, destroy the treasure, and rescue Toot before Cheesebreath gets his hands on their grandpa’s secret and uses it to break apart the Problim family…forever.

Natalie Lloyd’s final book in her The Problim Children series is a delightful romp in weirdness, danger and magic, as the beguiling siblings race against time to rescue their kidnapped baby brother, Tootykins, and Mama Problim, and search for and destroy their grandfather’s treasure. Island in the Stars will please Lloyd fans with this exciting conclusion to the series.

Unknowingly, the seven children have been carefully groomed to take on this mission for years. Even though their grandfather is dead, he knows that that their combined talents and magical gifts must be used together to carry out his instructions and stop the evil Augustus Snide — Cheesebreath. And they will be challenged to heal the rift among their treasure-seeking extended family members on the Desdemona O’Pinion side.

Readers will watch how each Problim child begins to grow into the amazing person they were born to be. Sal keeps his siblings together and calls out the best in each of them. Mona sails fearlessly through the threatening mist. Wendell commands the ocean. Thea unlocks doors and turns her face to the light. Frida throws beams of fire from her hands. Sundae speaks sunlight into every dark corner. And flatulent Toot, a hero and not a captive, leaves his trademark farts to communicate with his siblings. “#45 The Braveheart Fart: The toot, used by Toot to summon his courage and drive fear into his enemies hearts. Smells like moldy cheese and sweaty victory.”

Lloyd’s plot is an lively and dangerous. Her narrative is notably original with clever wordplay, rhymes and vivid imagery. Scattered throughout the story are pen and ink drawings that heighten the action and add to the story’s quirky appeal. The book reminds me of Pippi Longstocking, who lives on her own and is free to develop her imagination and goes on great adventures. Today’s readers will liken Lloyd’s middle grade work to Lemony Snicket, The Penderwicks and Roald Dahl. Verdict: Island in the Stars is an entertaining page turner that is full of heart and courage. It is perfect for gift-giving!

Natalie Lloyd is the New York Times bestselling author of A Snicker of Magic, which has been optioned for television by Sony TriStar. Lloyd’s other novels in The Key to Extraordinary,  Over the Moon, and The Problem Children series. Lloyd lives in Tennessee with her husband and her dogs. Visit Lloyd at her website.

Greg Pattridge is the host for Marvelous Middle Grade Monday posts on his fascinating Always in the Middle website. Check out the link to see all of the wonderful reviews by KidLit bloggers and authors.

*Reviewed from a library copy.

The Find Out Files by Isabelle Filliozat and Virginie Limousin is a new series of four activity books that help children explore what it means to be themselves through their emotions, fears, anger and sibling relationships. Published by Magination Press, May 19, 2020, they target children ages 6-10. The four books include a Readers Note written for adults with information tools and tips for exploring the topic with their children. The pages are filled with creative, fun, engaging and expressive illustrations by Eric Veillié and Fred Benaglia.

Each interactive book has an animal that pops up throughout to guide young readers on their journey to self-discovery. The books range from 80 to 90 pages and include activities, drawing pages, crafts, short quizzes, cut-outs and stickers. The book can be used alone or with an adult. These books are timely and perfect for the summer.

Verdict: An engaging series that will help children focus, calm themselves and navigate relationships. They will provide hours of creative and imaginative activity! They are fun! They also make great gift books. 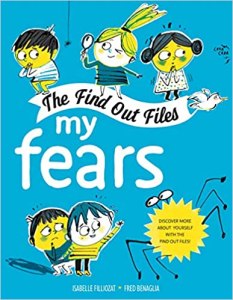 Synopsis: This not-so-scary activity book helps kids understand why they get fearful and reassure them that everyone feels afraid sometimes. Some fears can be useful. Using the fun activities plus crafts, stickers and more, this book will help kids face their fears and learn to take chances, have fun, and be a less afraid kid! It includes a Readers Note written for adults with information tools and tips for exploring the topic with their children. 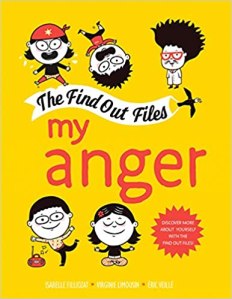 Synopsis: This useful activity book will help kids understand that getting angry is a normal part of life. It may be a bit uncomfortable at times, but it’s OK if kids need to be mad! Children will explore anger through fun activities coupled with humorous illustrations and will discover what it means to be angry, why it happens to everyone, and how to better handle it. Allowing children to work through their anger will help them better understand themselves, others, and the world. It will help them establish their sense of self and self-confidence. 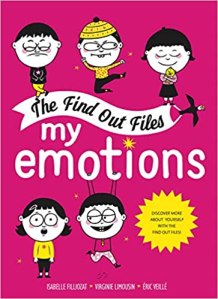 Synopsis: This clever activity book is a fun-filled tool for kids to discover self-expression and awareness. “Sometimes you may want break things, or want to run as fast as you can. Sometimes you want to jump with joy or want to cry. Emotions can be all over the place!” This book offers kids all sorts of information to nourish and appreciate their emotional life. Young readers will learn how to name their emotions, understand and accept their feelings, and develop emotional self-awareness so they can get on with the business of being a kid. 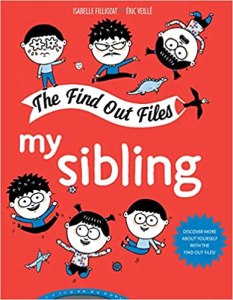 Synopsis: This helpful activity book offers activities to help kids get along with their brothers and sisters. Kids think that they are expected to love their brothers and sisters unconditionally, but sibling relationships can be really complicated. This book covers jealousy, fairness, sharing, parent-child  relationships, and tons more to helps kids find a common ground with their siblings if things get too fraught or upsetting.

*Review copies provided by the publisher in exchange for a review. 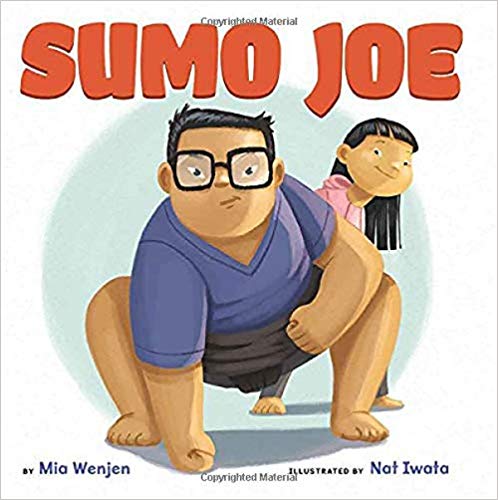 Opening: Get up early, have to hurry. / Sumo Joe.

On Saturday mornings, Sumo Joe is a gentle big brother to his little sister. But on Saturday afternoons, he and his friends are sumo wrestlers! They tie on make-shift mawashi belts, practice drills such as teppo, and compete in their homemade ring. They even observe sumo’s ultimate rule: no girlsl allowed! But when Sumo Joe’s sister wants to join the fun, Sumo Joe is torn between the two things he’s best at: sumo, and being a big brother.

Mia Wenjen’s debut book, Sumo Joe, is an original, lively and heartwarming multicultural story about sibling relationships and martial arts for children. I knew little about sumo wrestlers, so I enjoyed learning about this ancient Japanese sport.

The rhyming text is clever and simple enough for children to read on their own. Nat Iwata’s big colorful illustrations are perfect for Sumo Joe. They are bold, expressive and humorous. They show the bond between the siblings, as well as the competitiveness.

Sumo Joe is gentle and kind. His determined sister, Aikido Jo, uses her training in aikido to take on her brother in the sacred ring, even though “no girls” are allowed.  And you will have to read the book to find out what happens with his spitfire little sister, who has some moves of her own.

Readers will learn about wrestling, blessing the makeshift ring of pillows with sacred salt, sumo techniques and the traditional apparel – black  mawashi belts.

Resources: Make sure you check out the Author’s Note about the sport of sumo wrestling. There is a Glossary of terms about sumo wrestling moves. Visit Wenjen’s page for Sumo activities. Also check out Lee & Low’s Teacher Guide.

Note: Mia Wenjen would love to do Skype visits with school classrooms. Her visits are free. Please email her at pragmaticmomblog@gmail.com if you would like to arrange a visit.

Mia Wenjen is an entrepreneur, children’s author and a blogger at Pragmatic Mom, a popular online resource for parents and educators. As the cofounder of Multicultural Children’s Book Day, Mia is passionate about diverse representation in children’s picture books.

Multicultural Children’s Book Day 2020 (1/31/20) is in its 7th year! This non-profit children’s literacy initiative was founded by Valarie Budayr and Mia Wenjen; two diverse book-loving moms who saw a need to shine the spotlight on all of the multicultural books and authors on the market while also working to get those book into the hands of young readers and educators.

Seven years in, MCBD’s mission is to raise awareness of the ongoing need to include kids’ books that celebrate diversity in homes and school bookshelves continues.

We’d like to also give a shout-out to MCBD’s impressive CoHost Team who not only hosts the book review link-up on celebration day, but who also works tirelessly to spread the word of this event. View our CoHosts HERE.

Hashtag: Don’t forget to connect with us on social media and be sure and look for/use our official hashtag #ReadYourWorld.