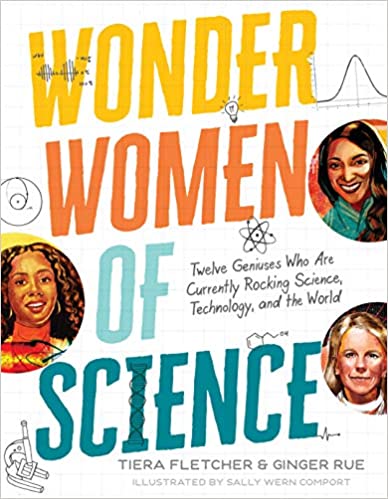 Wonder Women of Science: Twelve Geniuses Who Are Currently Rocking Science, Technology, and the World

By Tiera Fletcher and Ginger Rue

Searching the cosmos for a new Earth. Using math to fight human trafficking. Designing invisible (and safer) cars. Unlocking climate-change secrets. All of this groundbreaking science, and much more is happening right now, spearheaded by the diverse female scientists and engineers profiled in this book.

Meeting Award-winning aerospace engineer Tiera Fletcher and twelve other science superstars and hear them tell in their own words not only about their fascinating work, but also about their childhoods and the paths they traveled to get where they are — paths that often involved failures and unexpected changes in direction, but also persistence, serendipity, and brilliant insights. Their careers range from computer scientist to microbiologist to unique specialties that didn’t exist before some amazing women profiled here created them. Here is a book to surprise and inspire not only die-hard science fans, but also those who don’t (yet!) think of themselves as scientists. Back matter includes reading suggestions, an index, a glossary, and some surprising ideas for how to get involved in the world of STEM.

Women of Wonder is an inspiring and appealing resource for teen girls who love math and science and haven’t given a lot of thought to STEM careers. What I like most about the book is that the 12 women featured are actively engaged in fascinating work, NOW! They are leading the way for generations of girls and making a creative difference in their chosen professions — differences that impact the world.

Dr. Evelyn Galban is a veterinary neurosurgeon who has created a “niche” for herself in a field she calls “Zoo Neuro.” She combines her passion for wildlife and zoo animals with her passion for neurology. Animals have neurological problems just like humans.  Patrícia Medici, a research coordinator for the Lowland Tapir Conservation Initiative, devotes her life to saving the tapir in the Brazilian rain forests. Tapirs play an important role in balancing the ecosystem. Davine Durgana is an international human tights statistician who is using math to end modern slavery.  She gathers solid numbers worldwide to extrapolate how big the problem is. She’s devoted her life to helping enslaved people.  Dava Newman is an aerospace biomedical engineer and former NASA deputy administrator, who rethought the marshmallow space suit. Space suits provide pressure on the astronaut’s body to help blood circulation. Her modern superhero designs are more skintight and give astronauts greater movement. Kaitlyn Sadtler is an bioengineer who works with the immune system to regenerate tissue. Her goal is to help the immune body accept new tissue and not fight it.

This book is a beautifully crafted and the format is the same for each scientist/engineer featured. There is a lovely illustration of each woman and pictures of them as children. There is a biography about each woman and their amazing specialty.  There is a section called “The Spark” which includes information their childhoods that inspired their interests. Each woman writes a note to their younger self, a note to the reader, and concludes with “Words to Live By.” The book is quite engaging.

Resources: There is wonderful backmatter that includes 16 “Suggestions for Further Stem Awesomeness” — like finding a mentor, stepping outside of your comfort zone, attending a STEM summer camp, get involved in your community and make friends with failure.  There is also suggestions for additional reading.

Tiera Fletcher is an award-winning aerospace engineer who was hired by NASA directly after graduating from MIT. While working to send humans to Mars and inspire others to achieve their dreams, she was featured in a North Face ad campaign, “Tiera Moves Mountains.” She travels the world with her family.

Ginger Rue is an author and a contributing editor for Guideposts magazine. She lives in Alabama with her husband and their blended family.

*Review copy provided by Candlewick in exchange for a review.