The Terrific Toddlers is a new series of books, written by Carol Zeavin and Rhona Silverbush and illustrated by Jon Davis. The  explore important topics for active and curious  toddlers ages 2-3 — injury, sharing and separation anxiety — all a big deal for little ones. They are perfect lap books for children when they seek comforting and support. 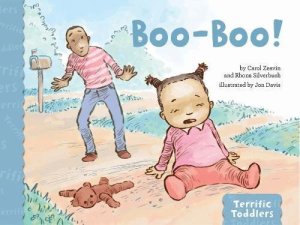 JoJo likes to fun FAST! When she falls down and hurts her chin, her dad tries to help her boo-boo. But JoJo is scared! JoJo screams when Daddy tries to wash her boo-boo.  And she doesn’t want a Band-Aid! JoJo puts a Band-Aid on Daddy’s nose. Her dad helps her understand that boo-boos aren’t so scary. Boo-Boo! is a book for toddlers about small cuts and scrapes.  The book includes information about helping toddlers with minor injuries.

Sometimes It’s hard for JoJo, Kai and Ava to say goodbye to Mom and Dad! There are tears and anger. Even if it’s for a short amount of time, Mom and Dad reassure them not to worry because they will always come back. When their parents return there are hugs and kisses. Bye-Bye! is a book written for toddlers about separation. The story includes information about helping toddlers with saying goodbye. 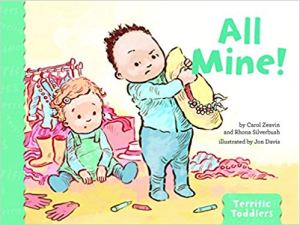 Ava, Kai, and JoJo are playing with their toys at school, but they aren’t ready to share and take turns! Ava wants the fancy hat Kai is wearing and grabs it. The teacher offers Ava  a sparkly necklace. In the kitchen Ava is playing puts a carrot on a plate. JoJo grabs the carrot. Can the teacher help them out? All Mine! is a book written for toddlers and their caregivers about toddlers’ need to feel ownership, so they can better navigate this tricky time in their development when everything is “All Mine!”

The Terrific Toddlers  books are 12 pages long, perfect for short attention spans. Each book is 8×6 inches,  just the right size for toddlers small hands. This is a great go-to series when children are dealing with scary feelings that they don’t understand and have a difficult time communicating.  Everything is a big deal.

Carol Zeavin and Rhona Silverbush books are written in simple, childlike language which is reflective of children’s everyday realities. The Terrific Toddlers series is based on understanding the developmental level of young toddlers.

JoJo, Kai and Ava all appear in the series, lending a familiarity and continuity for toddlers. I like the diversity throughout the books and the emphasis on gender neutrality as the toddlers play together. The soft and soothing pastel illustrations Jon Davis by are expressive and playful.

Resources: Each book includes a Note to Parents and Caregivers about helping and supporting their toddlers through difficult moments. 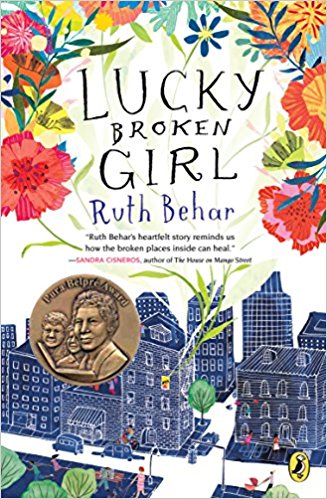 Opening: When we lived in Cuba, I was smart. But when we got to Queens, in New York City, in the United States of America, I became dumb, just because I couldn’t speak English. So I got put in the dumb class in fifth grade at P.S. 117. It’s the class for the bobos, the kids who failed at math and reading.

Synopsis: When Ruthie Mizrahi moves with her family from her homeland of Cuba to the bustling streets of New York, it’s a lot to take in. There are new sights, new sound, and a new language. But Ruthie is adjusting. She’s already mastering English and has made some new friends. In her neighborhood, she is  known as the Hopscotch Queen. And she dreams of getting a pair of “go-go” boots, like her friend Danielle.

After she and her family spend the day with old friends on Staten Island, Ruthie and her family are in a car accident on the way home. Ruthie’s leg is broken in several places and she ends up in a body cast that stretches all the way from her chest to her toes. Just when she was starting to feel like life in New York would be okay, she’ll have to lie in bed for eight months and be treated like a baby again. As Ruthie’s world shrinks because of her inability to move, her powers of observation and her heart grows larger and she comes to understand how fragile life is, how vulnerable we all are as human beings, and how a diverse group of friends, neighbors, and the power of the arts can sweeten even the worst of times.

This novel has heart, courage and hope. It’s uniquely diverse community of family, friends, neighbors, teachers, doctors, nurses and ambulance drivers will restore your faith in humanity. And readers will cheer Ruthie as she overcomes her fears and learns to walk again.

I especially like how Ruthie turns her anger and hate towards the boy who injured her into forgiveness and hope. She is relieved her parents won’t sue the boy’s family, because she realizes that they lost their son and are suffering. Ruthie concludes that people makes mistakes, but that doesn’t mean their bad.

It is a perfect book for readers recovering from a trauma or injury. As an adult I endured two traumatic injuries, so I understand how frightening this would be for a child. When Ruthie’s cast is removed after eight months, the real recovery begins on both physical and emotional levels. Ruthie is fearful and doesn’t feel safe outside of her bed.  She has to find her personal power again in a most remarkable way with the creative help and laughter of many memorable characters supporting her.

Lucky Broken Girl is based on the author’s childhood in the 1960s, as a young Cuban-Jewish immigrant girl who is adjusting to her new life in New York City when her American dream is suddenly derailed by a car accident that leaves her in a body cast. The interview with Ruth Behar at the end of the book is a must read. It will give readers greater insight into the story. Visit Behar at her website. There is a short video with the author. This is a great summer read!

Ruth Behar is an acclaimed author of fiction and nonfiction. Lucky Broken Girl, is her first book for young readers. She was born in Havana, Cuba, grew up in New York City, and has also lived in Spain and Mexico. An anthropology professor at the University of Michigan, she is the author of The Vulnerable Observer: Anthropology That Breaks Your Heart, An Island Called Home: Returning to Jewish Cuba, and Traveling Heavy: A Memoir in between Journeys, and other books about her travels, as well as a bilingual book of poetry, Everything I Kept/Todo lo que guardé. She lives in Ann Arbor, Michigan, and travels often to Miami and Havana.

Greg Pattridge hosts Marvelous Middle Grade Monday on his wonderful Always in the Middle website. Check out the links to see all of the wonderful reviews by KidLit bloggers and authors.