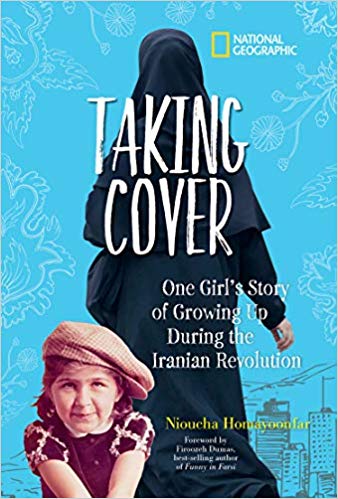 Taking Cover: One Girl’s Story of Growing Up During the Iranian Revolution

Synopsis: Nioucha Homayoonfar is a French-Iranian American girl who moves to Tehran, Iran, from Pittsburgh, Pennsylvania in 1976, at just five years old.  Nioucha must adjust to living in a new country, learning a new language, starting a new school, and making new friends. But none of that compares to the change Nioucha experiences during and after the revolution of 1979.

Religion classes became mandatory at school and the boys are separated from the girls. Nioucha has to cover her head and wear robes so that none of her skin shows. She has friends who parents are executed, and her own cousin is captured and tortured after he is caught trying to leave Iran.

And yet in the midst of so much change, Nioucha is still just a girl who’s trying to figure out her place in the world. She spends happy times with her family. She listens to forbidden music and idolizes pop stars, but has to do it carefully because Western music is banned. She gets her legs waxed and has her first boyfriend, but they cannot be seen in public together. They keep their relationship a secret. Will Nioucha ever get used to this new way of life?

Nioucha’s story immediately captivated me because I had a college friend who married an Iranian and moved to Tehran in the mid-70s. And I knew a woman whose father was a senior advisor to the Shah and fortunately lived in the Washington D.C. when the exile occurred. I was eager to learn more because so little has been written about the culture, the  oppression of women and Iranian life.  So I enjoyed this personal and moving true story about a 12-year-old girl navigating a very tense and complex time in Iran’s revolutionary history. One moment she is living in a very modern Iran where women enjoy a lot of freedom. When the Shah and his family are driven into exile, the Ayatollah Khomeini returns to Iran as its ruler. The changes are dramatic and scary at times, particularly when Iran and Iraq go to war and there are bombings in her neighborhood.

The first chapter is compelling and draws the readers to the everyday dangers of living in Iran after the revolution began. Smart opening!  “I knew I was in trouble when the white jeep made a U-turn. Driven by the Zeinab Sisters (or the Black Crows, as I called them), it raced toward me and screeched to a stop.”  The stage is set for readers when Nioucha is kidnapped by the Moral Police, thus allowing the author to back track and share vivid memories of her childhood, family life, food, customs, and traditions. She also includes eight photographs in the center of the book about her family, friends and her neighborhood.

Readers will enjoy Nioucha’s spunk and inner rebellion. Like many teens she takes risks. She dislikes the religion class and tells the strict teacher that she is Christian and not Muslim. She manages to get out of attending class for quite a while before she is caught. She also has a secret boyfriend, which could cause her serious trouble if she gets caught. There is humor in her behavior as she tries to figure out who she is.

This book was published in time for the 40th anniversary of the Iranian Revolution. It is an extraordinary story that breathes life into history and makes it come alive for readers. There are so many topics to explore in this memoir: revolution, oppression, tolerance, religion and history. Make sure you check out the foreword by Iranian-born author Firoozeh Dumas, who talks about pre-revolutionary Iran where women were making advancements in fields and where the population was secular and co-existing peacefully. At the end there is a map of Iran and the surrounding area and a time line of Iranian history.

*Reviewed from a library copy.