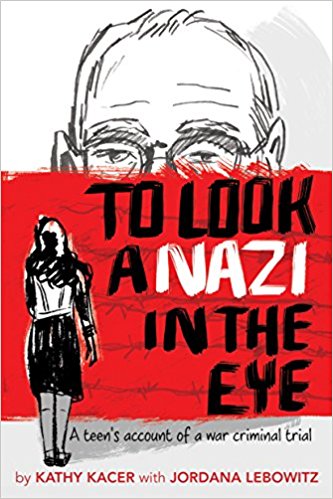 To Look a Nazi in the Eye: A Teen’s Account of a War Criminal Trial

Book Jacket Synopsis: True story of nineteen-year-old Jordana Lebowitz’s experience attending the war criminal trial of Oskar Groening. Groening worked at the Auschwitz concentration camp and became known as the “bookkeeper of Auschwitz.” In April 2015 he stood trial in Germany for being complicit in the deaths of more than 300,000 Jews.

A granddaughter of Holocaust survivors, Jordana knew a great deal about the Holocaust and had traveled to Europe with her Jewish Day School classmates to visit Auschwitz and participate in the March of the Living. There she met and became friends with Hedy Bohm, a holocaust survivor. A few years later she invited Hedy to speak with students and faculty at the university she attended. When Hedy told her that she had been asked to share her personal story of survival at Groening’s trial, Jordana wanted to go to Germany. But she was not prepared for what she would see and hear at Oskar Groening’s trial, including how much an ordinary seeming man — who at first glance reminded her of grandfather — could be part of such despicable cruelty. She had expected to hate him, and she did. But hate, just like forgiveness, can be complicated.

Listening to Groening’s testimony and to the Holocaust survivors who came to testify against him, Jordana felt the weight of bearing witness to history — a history that we need to remember now more than ever.

Kathy Kacer sensitively weaves a format for this compelling and dramatic nonfiction narrative that reads like a story. The chapters alternate between Oskar Groening’s life story and testimony, Jordana’s experiences of the trial, and her relationships with the courageous survivors she has come to love and respect. Kacer shares the survivor’s gut-wrenching stories with compassion, dignity and grace. Her pacing will keep readers glued to the story.

There are interesting dynamics at play throughout the story. Seeing the trial through Jordana’s eyes  (two generations removed) offers readers an open-minded and contemporary perspective. Jordana is loyal to the survivors she has journeyed with to Germany. Their painful stories are etched in her heart and mind. But she has trouble seeing Groening as a monster. She wants to hate him, but she sees a frail and sad man who admits he’s morally guilty for his role in the process. Yet she is disturbed by the details of his actions.

Jordana meets the deniers who say the Holocaust is a conspiracy. She converses with Reiner Hoess, the grandson at the Rudolf Hoess, the mastermind behind the design and construction of the Auschwitz-Birkenau extermination camp. She is moved that Hoess has spent his life talking about the Holocaust with young people and has come to see justice served in the Groening trial. She is shocked after a female survivor finishes her testimony, steps up to Groening, shakes his hand and says “I forgive you.” The other survivors are upset by the woman’s gesture. Jordana even boldly walks up to the judge and asks him “what is it like to be a judge at this trial…and does it affect you?”

Jordana doesn’t carry the baggage of a survivor. She has a youthful desire to be a witness to history and relates her experiences of the trial through a daily blog she writes for the Canadian Friends of Simon Wiesenthal Center — the center that paid for her plane ticket to Germany. In the end, Jordana realizes that the trial represents something greater than achieving justice for the survivors. It sends a message to the world that there will be consequences for anyone who is commits or assists in hate crimes, murders and genocide against human beings, no matter how long after a crime.  Jordana also sees an important role for “the youth of today to create a better tomorrow.”

Resources: There is an Epilogue at the end about other SS Nazi guards being brought to trial. Since most are in their 90s, time is running out. Kacer shares what Jordana has  done since the trial and her dream to become a human rights attorney. To Look a Nazi in the Eye is an important book for school libraries. It fits nicely with Holocaust education and will challenge students to have many lively discussions. Although this book is designated for those 13 and up, I would share this book with a mature middle grade student. Adults will benefit from reading this tactfully written book.

Kathy Kacer has won many awards for her books about the holocaust for young readers, including Hiding Edith, The Secret of Gabi’s Dresser, Clara’s War and The Underground Reporters. A former psychologist, Kathy tours North America speaking to young people about the importance of remembering the Holocaust. For more information, visit Kacer’s website.

Greg Pattridge is the permanent host for Marvelous Middle Grade Monday posts on his wonderful Always in the Middle website. Check out the link to see all of the wonderful reviews by KidLit bloggers and authors.