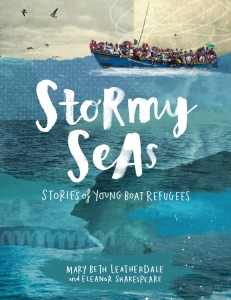 The plight of refugees risking their lives at sea has, unfortunately, made the headlines all too often in the past few years. This book presents five true stories, from 1939 to today, about young people who lived through the harrowing experience of setting sail in search of asylum: Ruth (18) and her family board the St. Louis to escape Nazism; Phu (14) sets out alone from war-torn Vietnam; José (13) tries to reach the United States from Cuba; Najeeba (11) flees Afghanistan and the Taliban; and after losing his family, Mohamed (13) abandons his village on the Ivory Coast in search of a new life. But life is not easy once they arrive. It’s hard to fit in when you don’t speak the language. These child refugees face prejudice. Yet the five make it and lead successful lives.https://gpattridge.com

Stormy Seas combines a vivid and contemporary collage-based design with dramatic storytelling to produce a book that makes for riveting reading as well as a source of timely information. These remarkable accounts will give readers a keen appreciation of the devastating effects of war and poverty on youth like themselves, and helps put the mounting current refugee crisis into stark context.

This is a timely and powerful story about resilience and determination. The book doesn’t pull any punches. It is the true stories of five refugee children who face real danger as they escape by sea. One sails aboard an ocean liner and the other four drift in open, unseaworthy boats that are overloaded. There are no lifejackets or bailing cans. Food and water is scarce. They face stormy weather and pirate attacks at sea. The boat refugees leave with hope in their hearts of seeking asylum and freedom from persecution, civil war, drought and natural disasters. They arrive at their destinations ill and needing medical treatment. Some end up in detention or refugee camps.

Reading stories about immigrants that span 80 years, offers readers a greater insight into the current refugee crisis in the Middle East, South America and Africa. It is interesting to compare the past with current events. The stories of the past echo similar themes refugees face today — they are not welcome by many countries. They are ostracized and treated like prisoners. This is an excellent and current book for middle grade students and belongs in school libraries.

Stormy Seas features a beautiful collage design with historical fact sidebars, maps of each child’s journey, timelines, quotes from leaders, and refugee data that includes costs and how many boat people die at sea. This book format is perfect for reading true stories and for research projects. Readers will gain new insights into a social justice issues that date back 600 years. Make sure you read Introduction and the Brief History of the boat people which dates back to 1670 with the Huguenots leaving France for England seeking refuge from religious persecution.

Greg Pattridge hosts the Marvelous Middle Grade Monday posts on his wonderful Always in the Middle website. Check out the link to see all of the wonderful reviews by KidLit bloggers and authors. 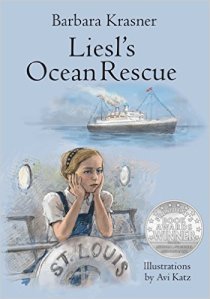 Opening: “What fun we had last night,” Josef Joseph, said. “It was the best birthday yet.” “You’re very old now, Father, “Liesl said. “You’re 56!” Mother placed breakfast plates in front of them.

Synopsis: Ten-year-old Liesl and her family were enjoying breakfast when two uniformed men wearing Nazi swastika armbands burst into their home and arrested her father. That 1938 night in Rheydt, Jewish businesses were destroyed and synagogues were burned. It was called the “Night of the Broken Glass.” Liesl’s father was eventually released from jail.  Her family along with 1,000 Jewish refugees, fled Germany in May 1939, aboard the MS St. Louis ocean liner, for temporary asylum in Havana, Cuba and later in America. But when they approached the island that looked like a paradise to Liesl, the ship wasn’t permitted to dock. They were stranded for weeks sailing back and forth between Cuba and the United States not knowing if they’d be sent back to Germany.

Barbara Krasner has written a compelling story based on the true experiences of Liesl Joseph, a courageous and endearing 10-year-old, who is heroic in her own way. Despite her own fear, she does her best to keep up the spirits of the children aboard the ship. She plays games and reassures them things will turn out okay. Her father, a lawyer, is busy negotiating arrangements with the Jewish Joint Distribution Committee in Paris, for safe passage to other European countries.

I am drawn to Holocaust stories, especially those involving children. Liesl’s story is one I had a hard time understanding. Why would the United States deny these refugees a home away from the tyranny of Hitler? Since this is a story about a child’s experience, that question is not addressed. However the story delivers a powerful message for older children about remaining brave in the midst of fear and uncertainty.

Liesl’s Ocean Rescue is an excellent addition to any school’s Holocaust collection. Although this is a picture book, I believe it would also serve well as a chapter book for older children. My only negative comment is that I felt the story ended abruptly.

Avi Katz’s black and white illustrations are expressive and capture emotions ranging from the fear during the German raids to the anxious moments of the refugees aboard the ship.

Resources: Make sure you read the Author’s Note at the end of the book to learn more about Liesl’s journey and fate. The author interviews Liesl Joseph Loeb at her home. Krasner also provides information on other resources to use with this story. There is a Teacher’s Guide at Gihon River Press.  Visit Krasner at her website.