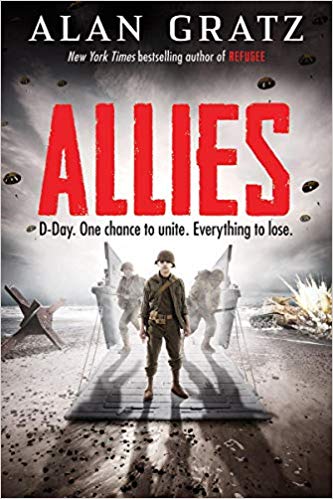 The fate of the world is in their hands.

June 6, 1944: The Nazis are terrorizing Europe, on their evil quest to conquer the world. The only way to stop them? The biggest, most top-secret operation ever, with the Allied nations coming together to storm German-occupied France.

Dee, a young U.S. soldier, is on a boat racing toward the French coast. And Dee — along with his brothers-in-arms — is terrified. He feels the weight of World War II on his shoulders.

But Dee is not alone. Behind enemy lines in France, a girl named Samira works as a spy, trying to sabotage the German army. Meanwhile, paratrooper James leaps from his plane to join a daring midnight raid. And in the thick of battle, Henry, a medic, searches for lives to save.

In a breathtaking race against time, they all must fight to complete their high-stakes missions. But with betrayals and deadly risks at every turn, can the Allies do what it takes to win?

A brilliant new novel by Alan Gratz that shows the horrific faces of WW II. It’s gripping, suspenseful and chilling.  Packed with danger, adventure and a cast of really memorable characters that make this novel unforgettable. Readers will find themselves deeply engrossed in this fast-paced and powerfully penned novel.

The characters represent many nationalities and are realistically portrayed. Narrator Dee Carpenter is a U.S. soldier headed toward Omah Beach in a Higgins boat. His real name Dietrich Zimmermann, a German immigrant who fled Nazi Germany with his parents when he was five. He’s advised to change his name in case he’s captured by the Nazis. He hides it from his best buddy, Sid Jacobstein, who is Jewish and anxious to shoot some “krauts.” My favorite moment, is when Dee realizes that he may have been the enemy he’s shooting at if he hadn’t fled Germany, and that the enemy is also a human being.

I shouldn’t be surprised, but racism, and anti-Semitism ran high among the U.S. forces because there were many foreign nationals and immigrants fighting for the same cause. Even Sid faces anti-Semitism from other soldiers in his unit. Henry Allen is a black battlefield medic, who is called “boy” and “coon,” by Lieutenant Hoyte, until Henry saves his life and finally sees him as a human being. Eleven-year-old Samira Zidane’s mother is part of the French Resistance. Samira, an Algerian refugee, bravely takes over her mother’s mission when she is captured by the Nazis. Samira cleverly makes it past German soldiers to tell the Resistance fighters that the Allies have begun invasion of France. James McKay is a Canadian paratrooper and Sam, who is allowed to  be a Cree in the Army and have respect from his unit.  But in Canada he isn’t allowed to vote and keep his tribal status.

It will be obvious to readers that the war changed all of those involved. Yet all the allies were united in one mission, to push back the Nazis and free Europe from Hitler’s tyranny and free the Jews suffering in concentration camps.

Gratz has provided a wealth of information for readers starting with a map of the invaded area at the beginning of the book. Gratz’s “Author’s Note” at the end provides deatils about the invasion, the number of soldiers involved from each country, the losses, operational names for all the Allies participating and their missions.  The code name for D-Day was Operation Overlord.

“And the worst part was that Germany hadn’t suddenly “become” racist and evil. The rot had been there, under the surface, the whole time. Hitler’s hate-filled speeches had allowed the seeds of German bigotry to grow like weeds until they choked out anything else that might have flowered there. Dee and his family had just been living in their own little bubble and hadn’t noticed it.”  Page 17

Alan Gratz is the New York Times bestselling author of several award-winning and acclaimed books for young readers, including, Grenade, Refugee, Pojekt 1065, Prisoner B-3087, and Code of Honor. Visit Gratz at his website.